Be prepared for a bloody and heart-racing 80-minute show with yet another prison-fighting flick that is packed with mystery and violence. Burke Wyatt, a dismissed cop, rekindles his love for the force after a conversation with his friend from the FBI. Burke is offered a job, but it entails committing a crime himself. With the promise of a trust fund for his son and his reinstatement on the force, is the sacrifice of taking on the job worth it? 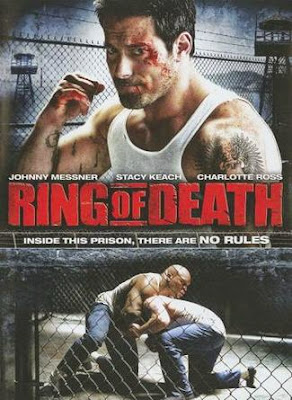 The film shows the clichés of underground flight clubs, tarnished and cruel security prisons, corrupt jail wardens, and filthy rich men who take joy over watching other people get hurt or even killed. But what sets Ring of Death apart from other prison fighting flicks? It depicts reality. It is dirty and bloody. This is perfect for movie buffs who love authentic fighting scenes. Blood spurts, bones break, and faces swell. No holds barred, no punches pulled.

If plain and neat fighting scenes already bore you, Ring of Death is highly recommended. The grit and the authenticity of the fighting scenes come through clearly. Invite friends over for a movie night that’s gut-wrenching and heart-pounding. And there’s no need to spend a lot for a movie on a dull Friday night when you watch movies for free online. When there’s nothing more to do, Viewlorium’s the site for you.
Posted by Unknown at 11:45